I’ve been taking photos of birds!

Pardon my lack of updating. It’s been a hectic past few months.

In that time I have rekindled my love for photography, and after renting a number of different lenses for my Canon 6D, I took the plunge and bought the 100-400mm lens. It’s a superb lens and so far has been fantastic for my new hobby of bird photography.

I (mostly) blame my new interest in birds and bird photography all on the Mandarin duck, by the way. He happened to be discovered in the Central Park pond not that long after I began taking my daily walks there. Around the summer of 2017, I had been relocated to work a few blocks away from the park. That fall, I began spending my hour break walking around the pond and taking photos with my phone. I was capturing the change of seasons from fall to winter, and with that, photos of birds. This was a good time to explore as the cold weather meant not a lot of people were around. One day I was particularly struck by a duck who I photographed and had never seen (or perhaps “noticed” is the right word here) before – the wood duck! I also saw an American coot at the pond for the first time and felt a kinship right away! Unfortunately, I got moved again, back to Hell’s Kitchen – and my daily pond walks came to an end.

Then the Mandarin duck arrived the following October, and he became an Internet sensation. A couple of my colleagues, who knew I liked to take my walks, told me all about it. By this point, I had been moved back to the 6th avenue office, placing me nearby to the park again. What luck! I wanted to see this duck myself and take a photo of him. According to my Instagram, I did just that on November 15th when I returned to Central Park “for the first time in months”! Like everyone else who heard about this duck, I was intrigued. This intrigue lead me to “bird twitter”, and more specifically the Manhattan Bird Alert twitter account.

It was like a brand new universe! All these wonderful creatures everywhere, and I had been oblivious all this time! I felt like I was suddenly in on a very cool secret.

It wasn’t easy to get a photo of the Mandarin duck with my cell phone, and I was increasingly jealous of every good photo I saw of him on Twitter. Even though my love of photography has never gone away – since I was young, I had a passion for it – it was something that I de-prioritized when I went to law school and after. But now I was interested in birds. I love learning and with my new hobby I was starting out knowing practically nothing. That’s exciting! Becoming interested in birds gave me a reason to do something that I love again. And so I began renting lenses for my camera specifically for bird photography. It’s challenging, and that’s what makes it fun.

So here are some bird photos that I’ve taken this year. I’ve become particularly attached to a night heron at the pond (dubbed Oliver). If you’re interested in seeing more photos please check out my Flickr page and my Instagram.

One bird I was particularly excited about seeing and photographing for the first time is the American woodcock. I didn’t even know they came through New York City – that’s how ignorant I was about birds. I only knew American woodcocks existed because I had seen funny videos on the Internet of them dancing. I never thought I would be able to see one in real life.

Well, that is until I saw this one and a couple more at Bryant Park! And if I recall correctly, I also saw at least one outside the NYPL as well. At this point, I had been relocated again at work and happened to be directly across from Bryant Park. (The case I was working on went on for almost two years, and during that time I was shuffled around quite a bit!) So when I saw the twitter alerts about American woodcocks, I had a great opportunity to finally see one for the first time. 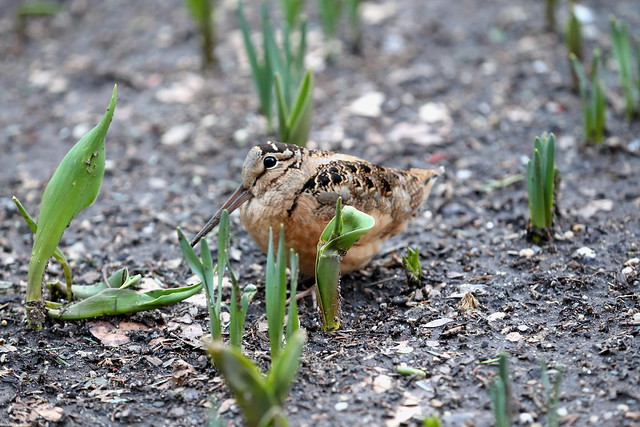 My first green heron. Again, thanks to a bird alert tweet, I knew that he had been at the pond. I sought him out – and luckily, he was there! 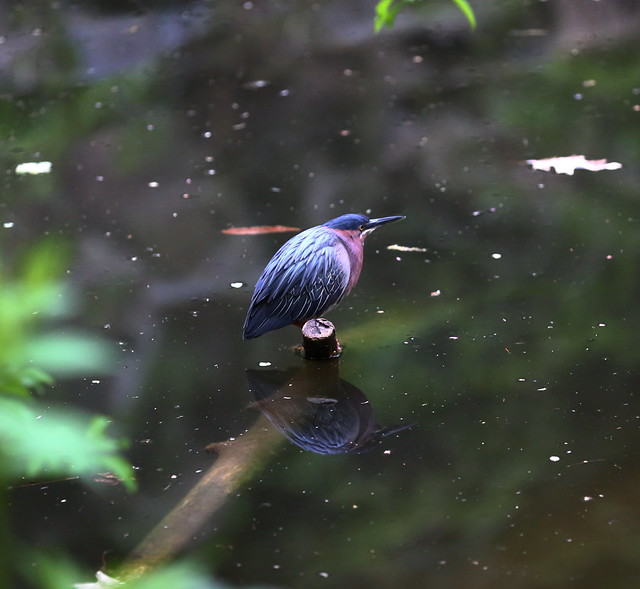 The gorgeous egret! I had seen an egret before on my walks to the pond, but never knew what it was. All I knew was that a cool, big, white bird happened to be around when I would take photos of the Gapstow Bridge. It was only way after the fact (I’m talking about months later) did I figure out what kind of bird it was.

Egrets are so graceful. I love watching them. I’ve yet to get a good shot of them flying – it’s one of my photography goals! 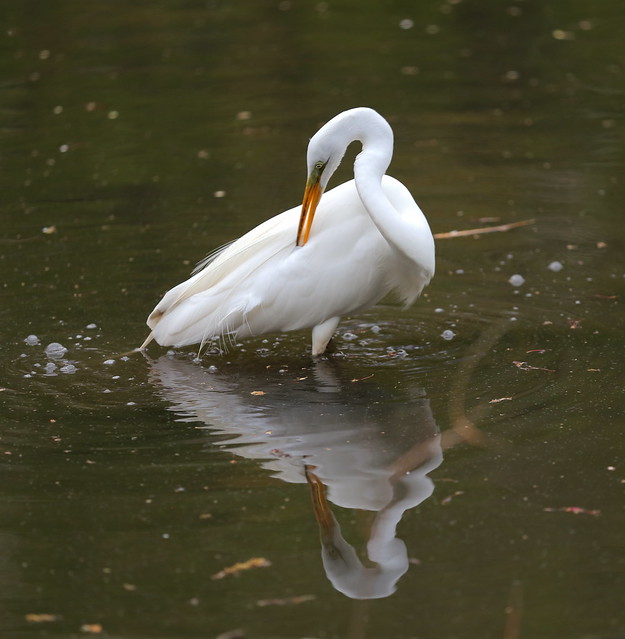 Since black is my favorite color, I can’t help but be in love with these gothic beauties, the double-crested cormorants. I saw this trio at the Central Park turtle pond on a bird walk: 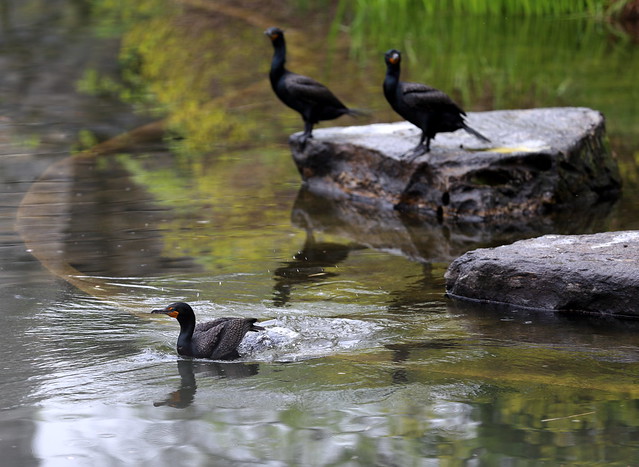 One of my favorite bird moments: Photographing the scarlet tanager! Made my spring! Earlier that morning, I had missed out on taking a photo of one on a Birding Bob bird walk. Afterwards, I began to wander around the Central Park ramble and happened upon a group of people with binoculars and cameras. To my delight, I saw this beautiful bird posing for all: 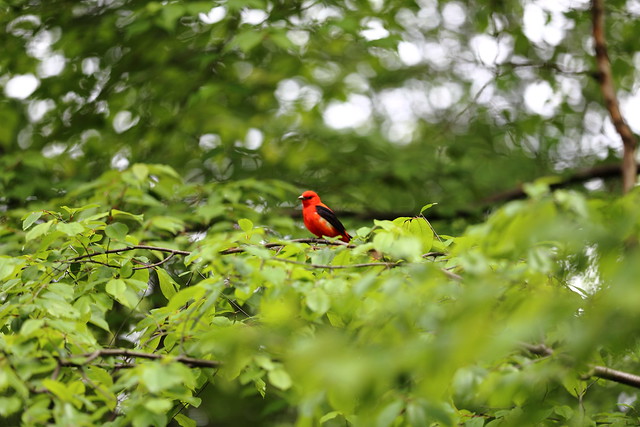 Not a great photo, but I really like the yellow warbler. So tiny and adorable. 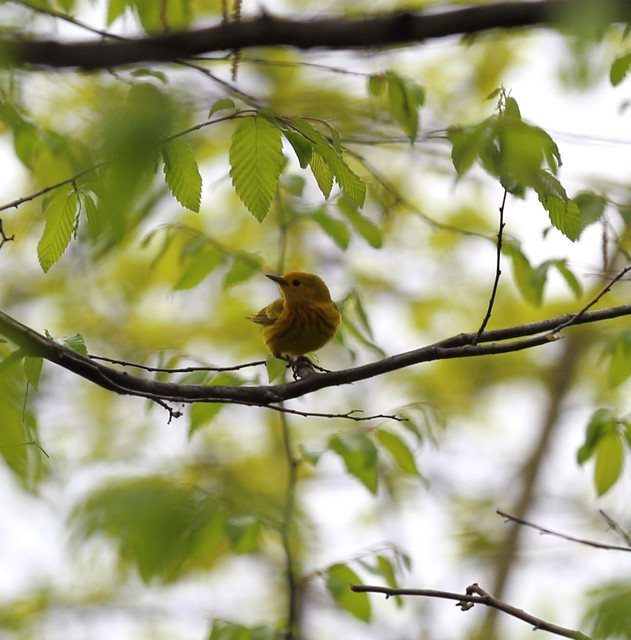 Another photo that’s not great, but I’m posting it because it was my first time seeing an indigo bunting. There’s a spot in the ramble that was my favorite (now it’s too overgrown to enjoy) called the oven, and this particular day I lucked out on seeing many birds. I had very much wanted to see an indigo bunting, and suddenly there one was! He dropped into the water right in front of my eyes! Here is the indigo bunting bathing with a Baltimore oriole. 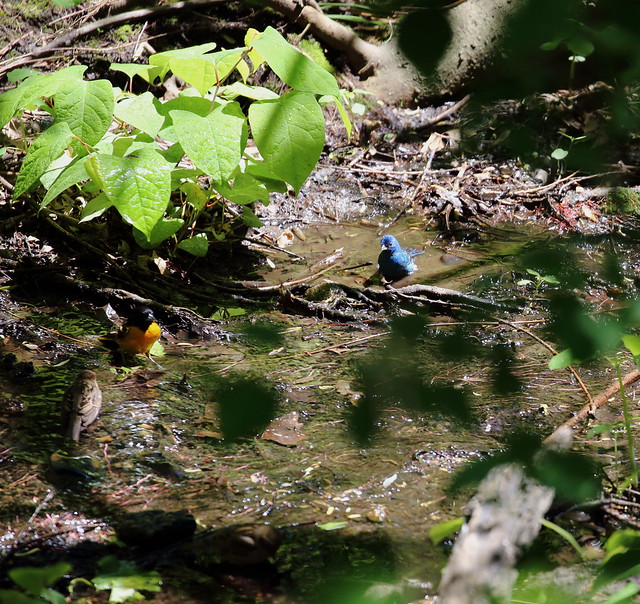 As I mentioned, I’m particularly fond of the black-crowned night heron at the pond. There are quite a few who linger around the area, and I refer to any that I see as “my familiar.” But there is one in particular who likes to come close to the shore of the pond (the one that me and a few others call “Oliver”), and I like to believe that he knows who I am. He probably wishes he could tell me to shut up, as I love to coo and hum at him. For a while now I’ve been hoping to get a shot of this night heron eating his dinner, but unfortunately whenever I’m nearby he either misses out on a fish or he’s too far away for me to get a good shot. And then this happened! 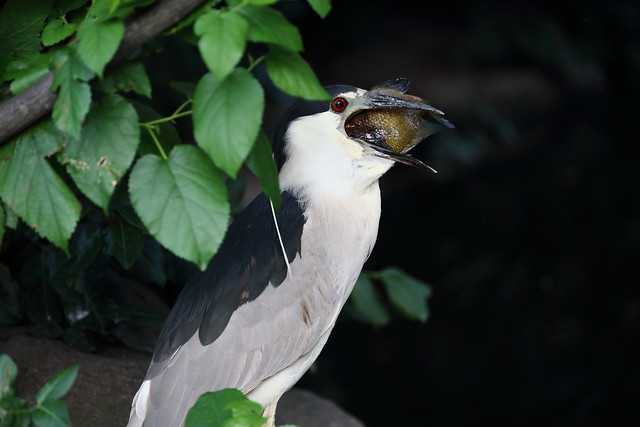 Apologies if anyone is upset by the image, but a bird’s gotta eat. The strange thing was that I had moved to take this photo of Oliver, and when I moved so did he. It was as if he wanted to make sure I got a shot!

Here’s a much sweeter photo of the black-crowned night heron caught napping in his favorite tree: 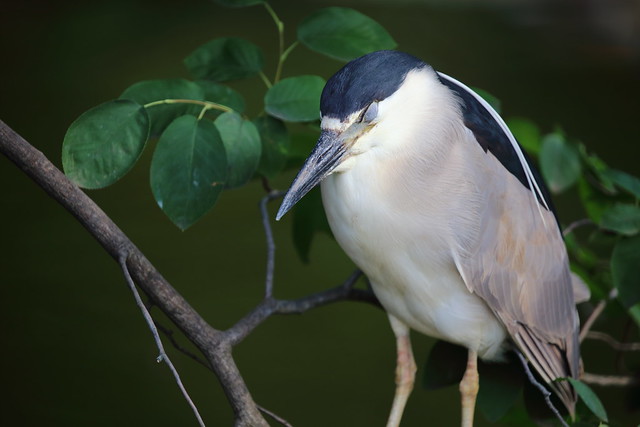 Becoming interested in bird photography gives me an excuse to wander around places I may not ordinarily wander. For example, on a recent evening I decided to go to Inwood Hill Park to see who was around, and being in the right place at the right time got me this photograph of an Eastern kingbird: 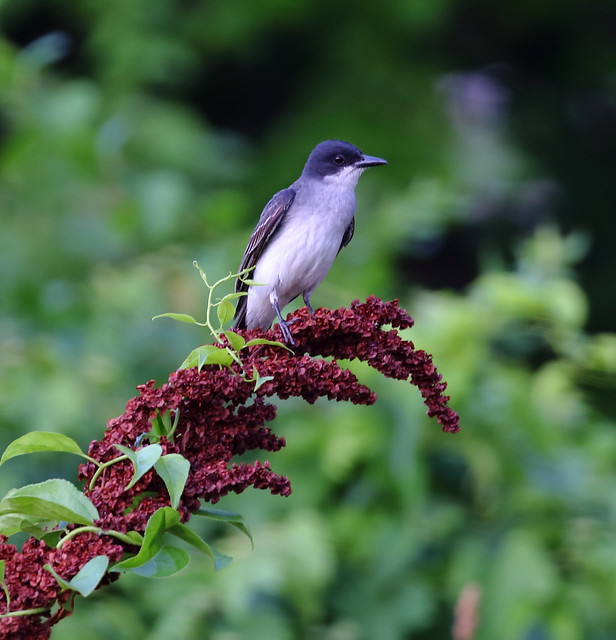 Not my first time seeing one, but my first decent photo.

And here’s the gorgeous wood duck of the pond! He’s so strikingly photogenic. I still remember the first day I saw him (maybe not the same one in this photo, but maybe so!). I posted my cell phone photo of him on my Instagram, not having any idea of what kind of duck he was. My friend Charles informed me that it was a wood duck – who knew ducks could be this beautiful! Now, I always try to photograph the wood duck when I see him. 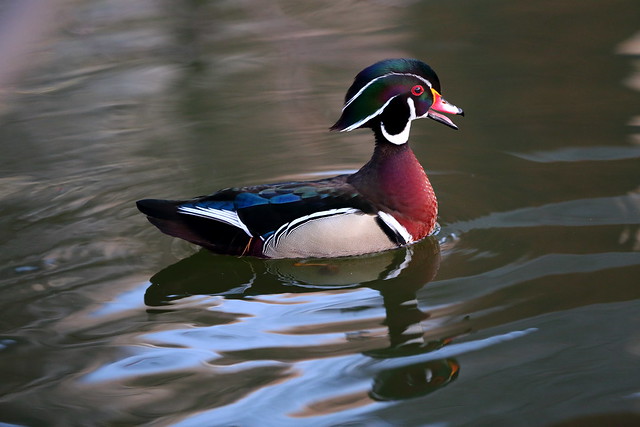 Of course, I can’t write this post without acknowledging the Mandarin duck himself… 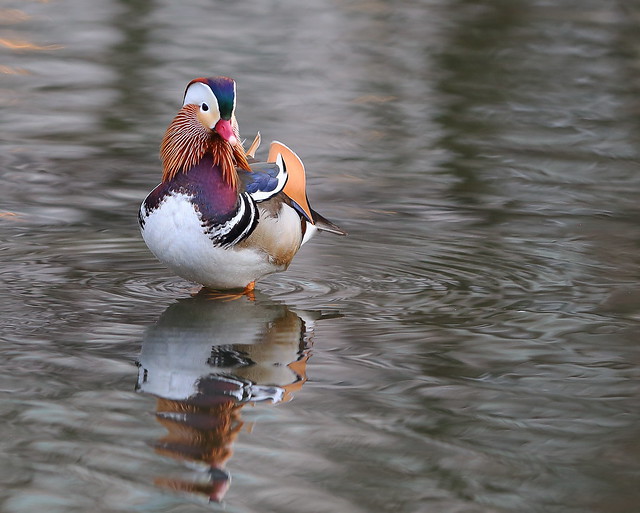 Right after I got photos of him in late March, he disappeared from the pond. Maybe he’ll come back, or maybe he won’t. But I’m pleased to have been able to photograph him with a decent camera at all, because my previous cell phone pictures were quite terrible. He deserves a good lens to capture his vibrant good looks!

Lastly, I’ve been taking as many photos as I can of a mallard duckling at the pond. I’d never seen a duckling before in real life, and let me assure you – they are as precious in reality as they are in photos! Here are some recent shots of him and his mother together: 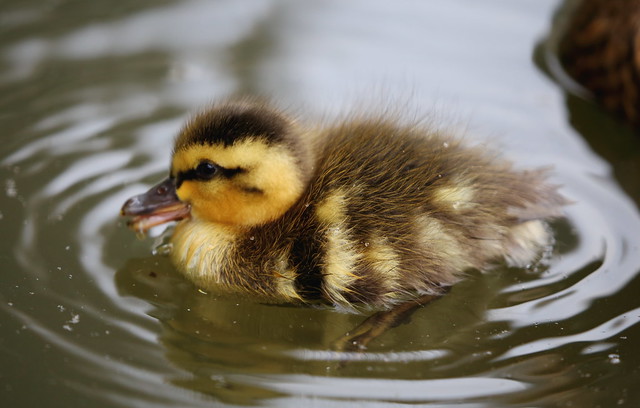 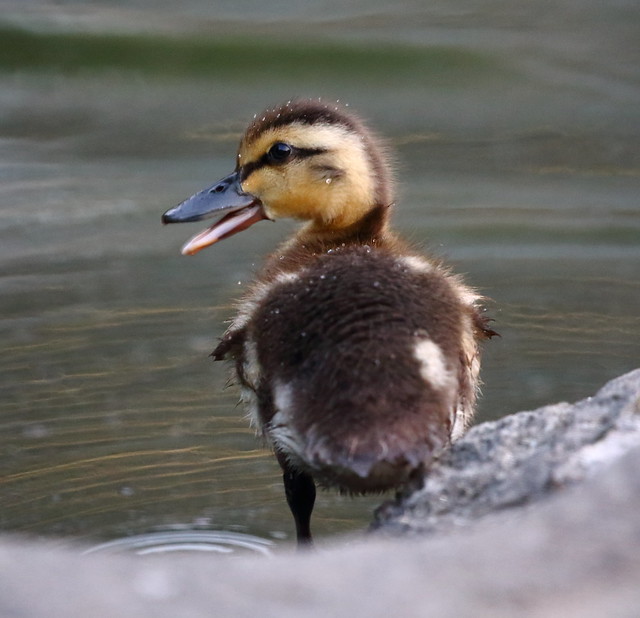 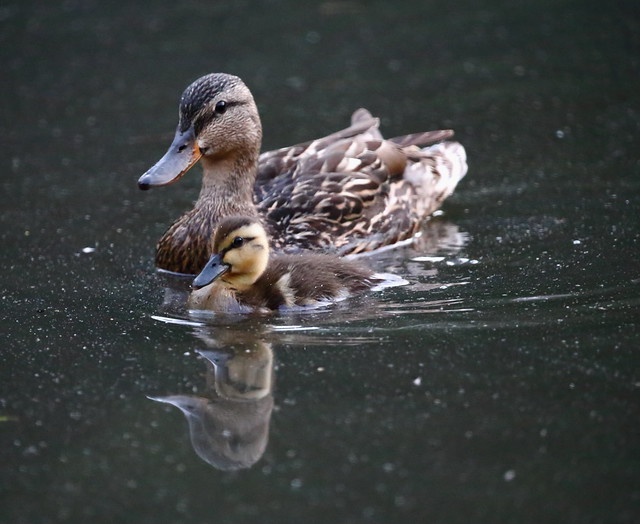 Isn’t that so sweet? I look forward to watching the duckling grow up, so to speak, and so I hope he or she will be safe at the pond.

Please do not repost these images without my permission!