Recently, animal advocates had cause to celebrate: Starting on March 1, NYC carriage horses will no longer be forced to stand on the 59th Street hack line alongside traffic and car exhaust and without shade. The horses have now been moved into Central Park, which is car-free. For more information about this victory, please read the news at the website of NYCLASS (New Yorkers for Clean, Livable, and Safe Streets).  NYCLASS has consistently fought for the welfare of our carriage horses and because of them, the horses no longer have to stand in traffic.

There is still more we can do for our carriage horses. The end goal for me is that the city has no carriage horses, period. In the meantime, I think we should support the legislation that can improve the lives of the carriage horses as soon as possible. One significant issue to address is that the horses have to work in extreme temperatures. Currently, the law doesn’t allow carriage horses to be working in 90 degrees or above. However, this does not take into consideration the heat index or humidity. According to the National Weather Service, “the Heat Index is a measure of how hot it really feels when relative humidity is factored in with the actual air temperature.”

It gets very hot and very humid in New York City. In fact, in 2017 New York was actually ranked the #1 Sweatiest City by an annual study done by Honeywell Fans and the environmental consulting company, Environmental Health & Engineering (EH&E). While other factors were also taken into consideration (such as lack of air conditioning in homes), “information from the National Oceanic and Atmospheric Association and the U.S. Census Bureau were used to determine a city’s average summer temperatures and population density when identifying the 2017 Sweatiest Cities.” Additionally, New York City and other urban areas suffer from what’s called “heat island“. From the Environmental Protection Agency’s website:

As urban areas develop, changes occur in their landscape. Buildings, roads, and other infrastructure replace open land and vegetation. Surfaces that were once permeable and moist become impermeable and dry. These changes cause urban regions to become warmer than their rural surroundings, forming an “island” of higher temperatures in the landscape.

Heat islands occur on the surface and in the atmosphere. On a hot, sunny summer day, the sun can heat dry, exposed urban surfaces, such as roofs and pavement, to temperatures 50–90°F (27–50°C) hotter than the air, while shaded or moist surfaces—often in more rural surroundings—remain close to air temperatures. Surface urban heat islands are typically present day and night, but tend to be strongest during the day when the sun is shining.

In contrast, atmospheric urban heat islands are often weak during the late morning and throughout the day and become more pronounced after sunset due to the slow release of heat from urban infrastructure. The annual mean air temperature of a city with 1 million people or more can be 1.8–5.4°F (1–3°C) warmer than its surroundings.2 On a clear, calm night, however, the temperature difference can be as much as 22°F (12°C).3

In a 2006 letter to then-Mayor Michael Bloomberg and the City Council, expert Holly Cheever, D.V.M., states:

The issue of safe temperature ranges for the horses is typically the most contentious problem for city councils in devising adequate protection for them. In the critical temperature range of 89 to 96 degrees Fahrenheit, a large horse, particularly one of the draft breeds, is greatly challenged in its ability to dissipate its body heat into an increasingly warm environment, especially if high humidity is a factor.  A horse can lose 8-10 gallons of fluid with exercise in a hot environment, but if the air is saturated by high humidity, cooling by evaporation cannot occur.  If the horse is dehydrated and cannot produce sweat, anhydrosis ensues and can be life-threatening.

Dr. Cheever goes on to say:

New York’s top temperature of 90 degrees F., coupled with its high humidity in the summer, pose a definite threat to carriage horse health and safety.

On a summer day the air temperature may be in the 80s, but the heat index could be  90 or above. And because of the heat island, the pavement can reach extreme temperatures. Under the current law, the horses would still be forced to work. In these conditions, horses are at serious risk for overheating and dehydration if they can’t drink enough water or cool themselves down. Last August, NYCLASS documented a carriage horse working under a heat advisory and in obvious distress. You can see the video of the horse here via the Stopping Horse Abuse Facebook page.

Forcing carriage horses to work when the heat index is 90 degrees or above is clearly cruel.

The good news is that we can stop this cruelty. Recently, Councilmember Keith Powers introduced Intro 1425, the Carriage Horse Heat Relief Bill, to amend the law. You can read the full text of the proposed legislation here. NYCLASS summarized the changes to the law as follows:

This new bill would extend protections to factor in the heat index, or “real feel” temperature, which we all know can feel far worse than air temperature alone.  As such, whenever the heat index is 90 or above, horses likewise should not have to be forced to drag thousands of pounds in dangerous humidity and heat through congested traffic or sit under the blistering sun with no shade waiting for fares.

This bill also makes key changes to an archaic system where either the NYPD or DOH measure temperatures in a haphazard way. Instead, high tech readers will be used to measure the temperature and relative humidity – the two components of the heat index. The formula used will be the same one developed and used by the National Weather Service. The introduced heat index bill is a small step for a more humane City.

We need to pass the Carriage Horse Relief Bill to promote the health and well-being of the carriage horses. The current law is outdated: It fails to protect horses from cruelty and allows for inhumane working conditions. The carriage horses’ essential needs must be taken into consideration and existing law fails to do that. Simply put, horses should not be working in extreme temperatures.

Please call your council member as soon as possible and tell them to support Intro 1425. FIND YOUR COUNCIL MEMBER HERE.

Nervous about making a call? Here is a sample script that you can use.

Hi my name is _______ and I live in New York City. I am calling to ask the Council Member to support Intro 1425, the Carriage Horse Relief Bill, to protect our carriage horses. The current law is inhumane because it forces horses to work when the heat index is 90 degrees and above, which puts the horses at risk for overheating and dehydration. By amending the law we can stop animal cruelty and abuse. Please support a more humane New York City and pass Intro 1425. Thank you for your time.

You can also send an email or contact your Council member via social media if they have an account.

The horses thank you! 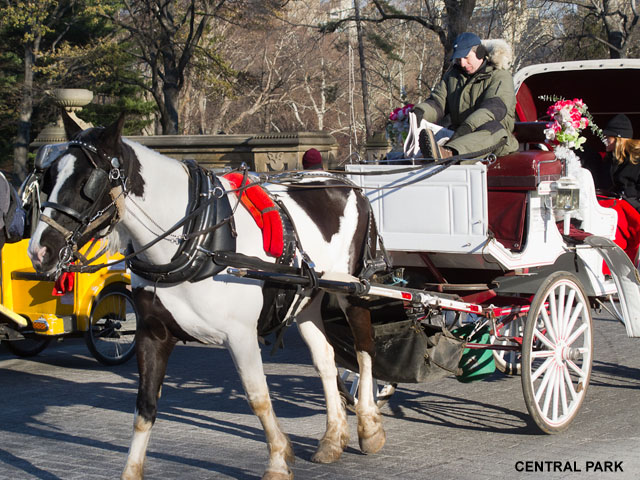