Video of the Day: A Dog Named Gucci trailer 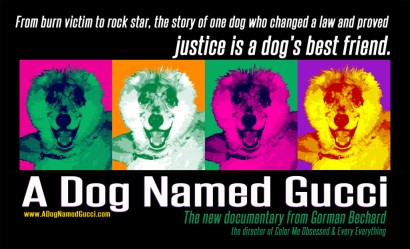 From burn victim to rock star, the story of one dog who changed a law and proved justice is a dog’s best friend.

A Dog Named Gucci is a new documentary film from Gorman Bechard, examining animal abuse laws in the United States and the animals who inspire us to make a change. The film’s title character, Gucci, was a 10-week old puppy when he was doused with lighter fluid and set on fire by his abusers. Thankfully, a man named Doug James happened to hear his cries, find him and save his life. But could there be justice for what Gucci endured? The film follows Doug as he fights to strengthen Alabama’s anti-cruelty law, working with legislators on a “Gucci Bill” to make domestic animal abuse a felony in his state. 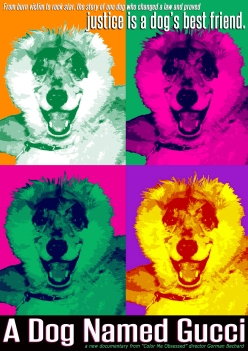 I’m sure that readers of my blog understand all too well how animal abuse crimes go unpunished. If you’re reading my blog then you care about animals, and that’s why I want to share the story of Gucci. Filmmaker Bechard explains: “Instead of assaulting the viewer with images of abused animals, we chose to tell what is ultimately a positive and uplifting story of one victim who went on to become a hero. This is a triumphant tale. Gucci might begin his life as Blackfish, but he’s a fighter, and in the end he becomes Rocky.”

Doug and Gucci are not the only ones making an impact on animal protection; the film explores other dogs who inspired people to improve laws in North Carolina and New York. The film also highlights a dog named Louis Vuitton, from Montgomery, Alabama, as the first dog to test the Gucci Law.

A Dog Named Gucci is available now on DVD and digital platforms. The film’s closing song, “One Voice” is also available now and features the amazing voices and talents of Norah Jones, Aimee Mann, Susanna Hoffs, Lydia Loveless, Neko Case, Kathryn Calder, and Queen’s Brian May. Profits from the sales of the song will go to support animal charities around the country!

For more information on how to purchase the film or the song, please see the website: http://www.adognamedgucci.com/