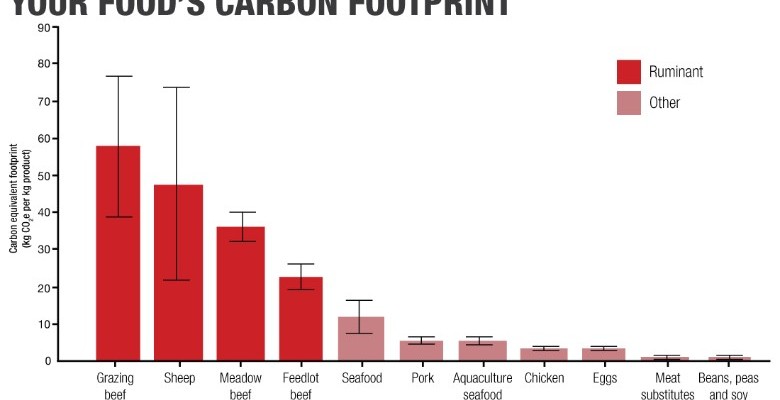 CNN has published a fairly decent look into the link between animal agriculture and climate change in a new article, “Climate Change: Why Beef is the new SUV.” The opinion piece is far from perfect, but it does have some great information and will hopefully change some people’s minds. The reality is that if we’re serious about combating climate change, we have got to change what’s on our plates! It is impossible to heal the planet while we are still raising and killing animals for food. Check out this graph that was published in the article:

Obviously, the most environmentally friendly foods are not animal products. Despite the many facts in the article, there were still an abundance of obnoxious comments left by readers. Admittedly, reading the comment sections is my guilty pleasure, although I can never stay there for too long. I like to indulge for a few minutes just to get an idea of how people are responding. The comment section on any animal product-related article is predictable. It’s always very “carnists say the darndest things“! For example, you’ll always find the person who needs to post about their desire to eat flesh and the person whose masculinity has been threatened. So the comments to the CNN article come as no surprise:

I picked these two comments from the section to respond to. I don’t feel that bad for picking on them publicly because they posted their comments on a national news site with their Facebook accounts. I’m not going to bother responding at the site because I don’t feel like getting into arguments for the rest of the day.

Paul’s comment is typical of the ignorant male who is anti-woman and thinks he’s edgy but is actually just upholding the status quo so as a result there’s nothing edgy or interesting about it. Blah blah, vegetarianism is effeminate and that’s bad because obviously women are the worst and blah blah i need a bacon blah blah. That’s Paul in a nutshell. Am I being too harsh? I am just so OVER male meat culture. I’m sure Paul considers himself to be a bad ass, and in all honesty it’s sad that Paul believes the propaganda that males must consume animal flesh and parts to be manly. That’s patriarchy for you. I recommend that Paul (or anyone else) reads The Sexual Politics of Meat.

The last comment is arguably the most common kind of comment you’ll see on any article that dare question the animal industry. You feel bad for these people in a way because they’re obviously feeling threatened and helpless by what they just read. It’s like when a kid is crying and upset until you hand them their special blankie or stuffed animal. I get that food is emotionally important to all of us, but there comes a time and place where we ought to accept new information and grow up.  So whenever I see comments like that, this is immediately what I think of: