The REAL Meat of the Matter: A response to Dan Murphy of Cattle Network

Dan Murphy recently published “Meat of the Matter: Legal Rights Just All Wrong” for Cattle Network, a news site for the animal agriculture industry. In his article, he attacks the work of the Nonhuman Rights Project and displays a weak understanding of animals in the legal system. He begins by writing inflammatory commentary about lawyers who work in animal rights (emphasis mine):

Look, it’s obvious why there are scores of lawyers working on animal rights. Although some are dedicated advocates who believe that jurisprudence is best pathway to protect animals from abuse, the majority of the ones I’ve encountered are in it for the glory. I mean, there aren’t that many legal frontiers left these days, and an ambitious attorney or a group of lawyers would become instant legal rocks stars if they were able to establish precedence for animal rights.

Steven M. Wise, the founder of the Nonhuman Rights Project, has dedicated his professional career to nonhuman animal personhood. To dismiss Wise’s lifelong work and claim that he’s only “in it for the glory” is not only ridiculous but incredibly insulting. Wise has practiced law for over three decades, has written four books plus numerous law reviews, has taught at Harvard, and travels the world speaking on animal rights. I have serious qualms that someone like Wise has done all of that (plus so much more) merely with the goal to be famous.

Murphy also doesn’t seem to understand the Nonhuman Rights Project’s basic argument. He writes that “their basic argument is that the law is ‘evolving,’ and thus the notion that animals should be afforded legal representation.” Not quite right. In a recently published article for Wired, Natalie Prosin of NhRP states:

“As abundant, robust scientific studies of [great apes, elephants, dolphins, and whales] have demonstrated, members of these species possess a powerful sense of autonomy; they live their lives not according to reflexes or innate behaviors but make choices and pursue actions based on complex internal cognitive processes. Detaining these animals in laboratories, locking them alone in cages or tanks, forcing them to perform, and keeping them as “pets,” grossly interferes with the exercise of their autonomy.”

Notice how Murphy never actually addresses this argument in his article.

He goes on to say (emphasis mine):

In reality, however, there is a clear, bright line that separates people and animals, and unlike all the parallels activists try to draw with slavery, that distinction is not “evolving.” Domestic animals — pets, livestock, working animals, companions animals, farm and food animals — are legally owned by people.

Murphy is claiming that a “clear, bright line” divides people from animals and the line seems to be that domestic animals “are legally owned by people.” While it’s true that animals currently possess the legal status of property, the relationship between animals and the law has been, without a doubt, evolving.

The best way to see how the legal world is evolving with respect to legal status of animals is to look at our companion animals like dogs and cats. Author David Grimm has written a book about this very subject (“Citizen Canine: Our Evolving Relationship with Cats and Dogs“) and has discussed his research findings in an interview with National Geographic here. Custody battles of pets — particularly dogs — are increasing, and exemplify the evolving legal status of animals. In these custody battles, courts are willing “to consider the welfare or best interests of the companion animal when determining which party should get custody.” This is remarkable because typically the best interests analysis is used in custody battle litigation involving human children.

More generally, laws such as the Animal Welfare Act (AWA) or local anti-cruelty statutes have been written or amended as our own relationships with animals evolve. The AWA, for example, has been amended quite a few times, broadening its depth and reach with each amendment. This is not to say that laws such as the AWA are not without their flaws — there is plenty to criticize about them — but to claim that the law doesn’t evolve is simply false. In fact, in 1970 the law was  “expanded to include warm-blooded animals generally used for research, testing, experimentation or exhibition, or as pets.” It was amended again in 1976, 1985, 1990, 2002, 2008, and may very well be amended again if the AWARE Act (The Animal Welfare in Agricultural Research Endeavors Act) gets passed. The AWARE Act was introduced after the New York Times broke the story of egregious abuses happening in the name of “experimentation” to farm animals at a US federal research facility. If this bill is approved, the protections of the AWA will reach farm animals at federal research facilities. Currently, they are excluded.

An interesting and worthwhile discussion of animals and legal rights can be found here, in David Favre’s law review article, “Living Property: A New Status for Animals Within the Legal System,” published in 2010 in Marquette Law Review.

Back to Murphy. He writes in his article:

[Animals] must be treated and handled humanely according to applicable local, state and federal laws, but they’re not people and they have no legal rights, no standing in court and no recognition as creatures possessing the same status as their owners.

What an oversimplification. There are so many exceptions and loopholes to existing, applicable laws that in many instances cruelty against animals is permitted. For example, the AWA only protects those animals that are defined as such under the law’s definition of “animal.” Consequently, under §2132(g)(3) of the Act, there are explicit exemptions for farm animals and horses not used in research. And the vast majority of animals used for research — 90 – 95% are in fact excluded from the Act’s protections.

Additionally, laws do not necessarily guarantee the most humane way of handling an animal. Using the AWA as an example again, the act prohibits unnecessary cruelty on the animal during experimentation, but that is the only restriction. For the purposes of analysis here, “unnecessary cruelty” means “gratuitous” pain. Thus, a lot of experimentation is permissible under the law. Or another example: Chickens are exempt from the Humane Methods of Slaughter Act, which is a federal law governing the way animals are killed for food. As a result, over 90% of all animals killed for food are not given the same federal protections as other food animals.

Furthermore, local anti-cruelty laws routinely exempt farm animals. This is one reason why ag-gag bills are so dangerous. Right at this moment, 36 states expressly exempt “customary” farming practices from their anti-cruelty statutes. As a result, agribusiness determines which farming practices are cruel or not. And so-called “ag-gag” bills seek to punish whistleblowers who expose cruelty at farms.

According to Murphy, the case is closed. Luckily for the animals, Murphy is wrong. 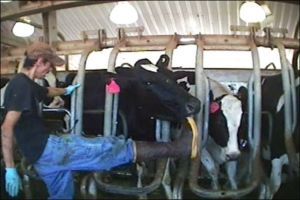 Abuse at an Idaho dairy farm.
Image is of a worker kicking a dairy cow in her face with his boot.