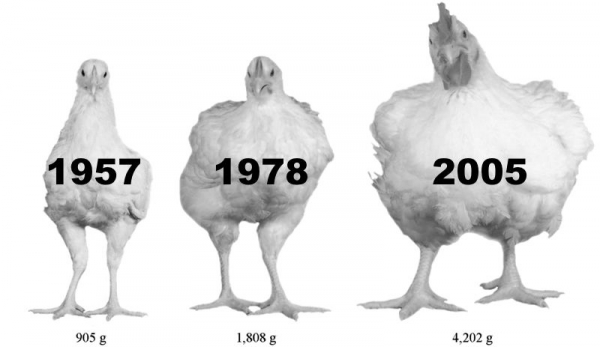 The Journal of Archaeological Science has recently published a paper, Livestock management in Spain from Roman to post-medieval times: a biometrical analysis of cattle, sheep/goat and pig, which “shows successive changes in the size of domestic animals over time relating to changes in the landscape and production systems.” Data from 41 different archaeological sites, dating from the Roman era until now, in the Iberian Peninsula was studied. Researcher Idoia Grau-Sologestoa explains:

“The increase in animal size is normally linked to improvements of an environmental type (for example to new ways of feeding) or of a genetic type (for example, by importing larger animals). Larger domestic animal size entails a number of economic advantages with an increase in meat production or traction strength. What is more, improved domestic animals tend to grow faster which helps to increase their productivity.”

I thought this was an interesting study because animals exploited in animal agriculture today have been horribly messed with to be bigger. This study helps us understand just exactly how much we’ve messed with animals for our benefit, not theirs. See, for example, chickens. Poultry Science recently published a study detailing just how big chickens have become in the last 50 years. 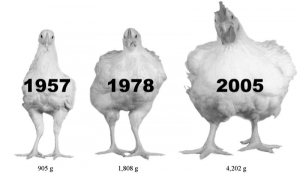 Grau-Sologestoa discovered in her research that, “[I]t is in the modern era that animal size reached its maximum.” Looking at the image above — are you surprised?

In other anthropological news, a recent study on dogs in Madagascar, African origin for Madagascan dogs revealed by mtDNA analysis, unveiled something rather mysterious. Peter Savolainen studied dogs in Madagascar “and the pets of ancient settlers from Indonesia. But to his team’s surprise, no trace of Indonesian ancestry could be found among the island nation’s dogs.”

From the abstract (emphasis added):

Madagascar was one of the last major land masses to be inhabited by humans. It was initially colonized by Austronesian speaking Indonesians 1500–2000 years ago, but subsequent migration from Africa has resulted in approximately equal genetic contributions from Indonesia and Africa, and the material culture has mainly African influences. The dog, along with the pig and the chicken, was part of the Austronesian Neolithic culture, and was furthermore the only domestic animal to accompany humans to every continent in ancient times. To illuminate Madagascan cultural origins and track the initial worldwide dispersal of dogs, we here investigated the ancestry of Madagascan dogs. We analysed mtDNA control region sequences in dogs from Madagascar (n=145) and compared it with that from potential ancestral populations in Island Southeast Asia (n=219) and sub-Saharan Africa (n=493). We found that 90% of the Madagascan dogs carried a haplotype that was also present in sub-Saharan Africa and that the remaining lineages could all be attributed to a likely origin in Africa. By contrast, only 26% of Madagascan dogs shared haplotypes with Indonesian dogs, and one haplotype typical for Austronesian dogs, carried by more than 40% of Indonesian and Polynesian dogs, was absent among the Madagascan dogs. Thus, in contrast to the human population, Madagascan dogs seem to trace their origin entirely from Africa. These results suggest that dogs were not brought to Madagascar by the initial Austronesian speaking colonizers on their transoceanic voyage, but were introduced at a later stage, together with human migration and cultural influence from Africa. 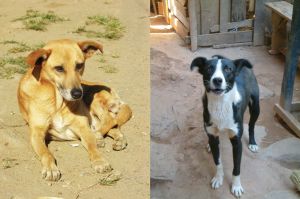 The paper is available online, in its entirety for free. I definitely recommend reading it!