Quote of the Day: Marc Bekoff Responds To Rhys Southan 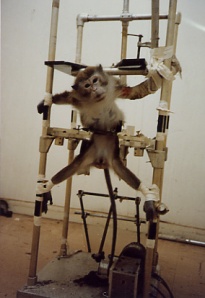 Is animal suffering really an “enigma?”

Rhys Southan is a former vegan who recently had an essay, “The Enigma of Animal Suffering,” published in the New York Times. Not too long after, Marc Bekoff published a response in his Psychology Today column, Animal Emotions, in which he wrote:

“They don’t have to do what we do nor feel what we feel to be granted the right to a good life. So, while the suffering of cows, pigs, sheep, chickens, and other food animals might not be the same as ours or the same across species, this is not at all surprising and does not mean that they do not suffer in their own ways. Indeed, all mammals share the same neural apparatus and neural chemicals that underlie their emotional lives, so let’s stop pretending that their suffering isn’t as real for them as ours is for us. We accept that prelinguistic humans suffer, so not being able to say that this or that causes pain isn’t enough to conclude that we don’t know that other animals really suffer. They tell us they suffer physically and emotionally in many different ways, and anyone who’s been around other animals knows this.”

I’d just like to add that this question of whether animals suffer or not reminds me of how people will pick and choose how to anthropomorphize animals: People find it difficult to believe that animals can suffer, but will have no problem believing that their food came from a “happy” farm where animals are treated “humanely.”

It also reminds me of the chapter of “Animals Matter,” on speciesism, that I just blogged. It should not matter, for example, whether a cow suffers like humans suffer. What matters is that the cow *can* suffer.