Photo of the Day: “Nice To Meat You”

Studies have demonstrated that to win people over to a cause, such as alleviating world hunger, it is far better to appeal to the heart rather than the head: people tend to respond more charitably to “identifiable victims” than they do to statistics. “The death of one man is a tragedy, the death of millions is a statistic.” (It does get more complicated than that, however; please see this article.) Knowing how people are generally going to respond has been beneficial to animal advocacy. When we advocate for veganism, for example, and we’re emphasizing the large numbers of animals — all the billions of nameless victims — suffering in our food system, we may be deterring others from joining the cause. When discussing animal welfare issues or promoting veganism, focusing on individual, identifiable victims rather than statistical data seems to generate more success. (Again, this is complicated — I suggest checking out the essay “The Stat Trap” from Uncaged: Top Activists Share Their Wisdom On Effective Farm Animal Advocacy for more information.)

If you’re a vegan and are on Facebook, chances are you’ve come across the Brazilian video of a man selling sausage in a grocery store. When potential customers ask for sausage, he takes a baby pig and places him in a device where he will be ground up instantly and given to the customer. Of course, it is a prank: A woman is hiding under the device to take the pig, and she pushes sausage through the device. But to the customer, it really does seem like the pig instantaneously became the food product. The reactions of the customers are priceless:

This prank seems to suggest that if people make the connection that their food product was once a living, breathing being (the “identifiable victim,” right before their eyes), they may be deterred from eating meat. And I have often read or heard comments from fellow animal advocates who wonder: If we put photos of animals on meat products, would customers would be less inclined to purchase them?

Well, a German farm seems to think that their customers would not be deterred.

Is your palate preference more important than someone’s life?

For a German start-up firm in Berlin, factory farming is the ‘wurst.’ Online distributor Meine Kleine Farm, or My Little Farm, is marketing packaged sausages from local farms as ‘Meat on a Mission’ and is labeling its produce with pre-slaughter photos of the pigs, cows and geese that were processed.

On its website the firm promotes the end of “anonymous livestock breeding” and says it wants to give meat a face, showing images of “happy animals, which bring good karma to the consumer, the farm animals and the rest of the world.” 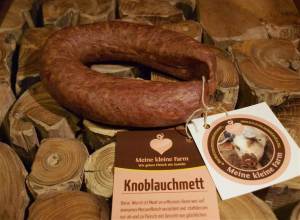 Products from mixed ground meat, with pork and beef, are advertised with the slogan “Nice to Meat You” and show model-style portraits, along with short biographies of the animals that were slaughtered at local butcher shops.

Despite significantly higher prices, products from organic farming are enjoying growing popularity in Germany, with some carnivores looking for more than just a photo to enhance the consumer experience.

“After we first introduced our main supplier, farmer Schulz from the small town of Goemnick, we triggered unexpected pig tourism,” Buchmann said.

“The consumers suddenly showed up at Schulze’s fence and watched his pigs run around all day.”

I don’t eat animals anymore (obviously), but I wonder how I would react if I was still eating them and came across products attached with the animal victim’s information and photo. I’d like to think I’d reconsider… but maybe not. I wonder how this marketing scheme will fare for the farm in the long run, especially in light of the social psychology research.

What do you think?

Source: Germany’s My Little Farm Wants You to Meet Your Meat