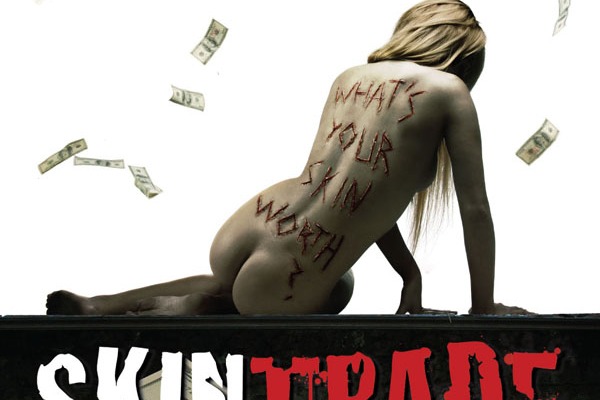 “Skin Trade” and the Cruelty of Fur.

Last night, I attended a screening of the documentary film “Skin Trade” at Bluestockings Bookstore and Activist Center. I wanted to attend because even though I already boycott fur, I wanted to learn more about the industry.

“Skin Trade” was directed and produced by Shannon Keith, also an animal rights attorney. The film was a blend of animation, interviews, and undercover footage. “Skin Trade” details the history of wearing fur and the rise of its cultural value and describes the lies and deceit of the fur industry.

Fur Fact… The film showed a coat priced at $3,000. The number of coyotes killed to produce that one coat? 11. 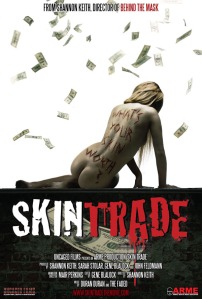 Scattered throughout the film are scenes of undercover activists posing as interested and curious consumers looking for a fur coat at high end retailers. Fur comes from animals who were trapped or animals who were “farmed” for their fur. I don’t know which method is worse – both methods are inherently cruel, and all of it brought me to tears. Unsurprisingly, all of the customer associates at the stores wanted the consumers to believe that their fur came from a humane place and that no cruelty was committed.  Some animals who become trapped can be stuck there for days, suffering in agony until a trapper comes along to kill them. Animals on farms, imprisoned in cages, can become so stressed out that they resort to cannibalizing their cage mates.  On fur farms, animals suffer from lack of water, from abuse, and finally from death — which results from having their necks broken or being anally electrocuted. We know this happens, that this is the reality of the fur industry because of activists who have gone undercover and filmed these horrors. Juxtaposing the reality of the industry against their false claims was a powerful editing method. At one point, an associate at a retailer even went so far as to claim that the animals at the fur farms are “treated better than humans.”

Fur Fact… Synthetic fur can be just as warm as real fur, and both have the same “R-value,” which is the measure of heat retention. 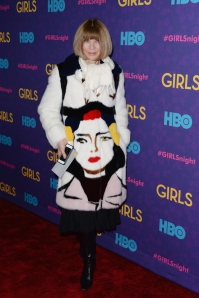 There are a couple of answers to that question offered in the film. One is that the fault lies with the editors of fashion magazines, who are really the ones dictating the direction of trends. These are people like Anna Wintour, notorious for wearing animals (pictured, right). The other answer is that consumers are ignorant and their ignorance helps create the demand. I’m sure there are some people who do not know the reality and horror of the fur industry — that’s why films like “Skin Trade” and activism is so important. But the information on this industry is readily available online for anyone with access. I personally think it’s more so that consumers are aware of the cruelty — and just don’t care. For example, in the film, people (all women) interviewed on the street about their fur clothing described their outfits as “elegant and yummy” and exhibited no remorse for their fashion.

In November, an article published on gulfnews.com, Who’s got a problem wearing fur today?, describes how fur fashion is once again a rising trend. Consumers are either ignoring the readily accessible information on the Internet detailing the reality of the fur industry or they have seen the information — and just don’t care.

The world [fur] trade is now worth $15.6 billion, with pelts reaching record prices at auction. And the demand is not merely issuing from Asia, where sales have tripled in under a decade.

Last month, results were published of a survey of 6,000 adults across six European countries, including the UK. Thirty-nine per cent of European consumers said that they liked seeing fur in fashion and furnishings — more than double the number in 2010; 35 per cent had at least one fur item at home and 36 per cent either wear fur, or would like to do so.

How can people not care? Wearing fur is an act of speciesism. Speciesism allows us to continue to exploit animals. Fur apologists, like the ones surveyed above, perceive (certain) animals as no more than a commodity. To them, a mink, a fox, a coyote, or a lynx is not a sentient being with integrity and an interest in his or her own life, but something to be killed, skinned, processed, and made into an object. But note that I wrote “certain” animals are commodified. When it comes to animals we interact with as pets, all of a sudden the cruelty of the fur industry is obvious. For example, when it was discovered that cats and dogs in China were being rendered into “faux fur” coats in the United States, consumers complained. Burlington Coat Factory had bought 400 coats from an Asian vendor and later discovered that the “faux” trim on the jackets was dog fur. Their spokesperson had this to say: “It is not our policy to sell products with fur from domesticated animals. We find it repugnant.”

Their wording is interesting — Do they find it repugnant to wear a non-domesticated animal, like a fox? The good news is that I did a quick search through Burlington’s website and haven’t found any real fur items. 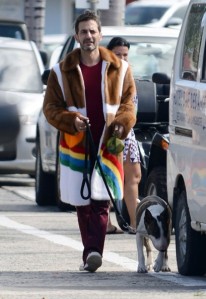 Designer Marc Jacobs in a fur coat. Would he parade around in a Prada coat made of dog?

Following the  fraudulent labeling controversy, legislators enacted H.R.2480, the Truth in Fur Labeling Act. Before this Act, products that were less than $150 did not have to disclose that they were made of real fur. Now, regardless of value, fur must be labeled. Interestingly, the change in the law doesn’t apply to fur from a trapped or hunted animal.

Would legislators have acted so quickly if the mislabeled fur was not a domesticated animal? 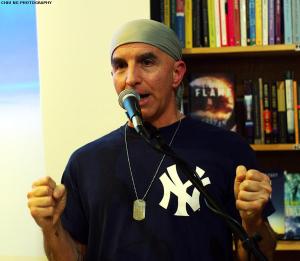 Following the film, my friend Mickey Z. spoke about activism (his speech from the event has been uploaded to Facebook) and speciesism. As Mickey points out, there are so many roles for us to play: We need to embrace a diversity of tactics in our activism. “We need more people involved, and we need more solidarity amongst the groups.” From making films about the exploitation of animals to leafleting to protesting outside the Fur Source in NYC, there’s a role for each of us; everyone has value to add to the animal rights movement.

He also points out that many activists have not yet embraced surrendering their speciesism. This is an important point that must be said again and again; “There is only one kind of liberation and that is collective liberation.” Justice belongs to all earthlings — not just the ones you see as cute and cuddly, or the ones you get to walk on a leash, or curl up with on the couch. Relating this back to the fur industry — consumers should be outraged and boycotting the exploitation of all animals used for fur, not just the dogs and cats. 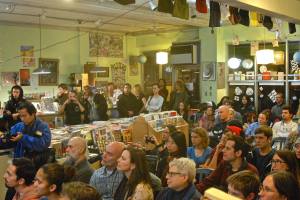 Crowd at Bluestockings for the screening of “Skin Trade.” Photo by Robert Jensen and used with permission.

Compassion is the fashion, and fur is dead.