Fargam, The Monkey Iran Sent to Space — & All The Animals We Sent Up Before Him

Fargam is the name of the male rhesus macaque monkey who was just recently launched into space from Iran.  Luckily for little Fargam, he returned to Earth alive and safe. He was launched 72 miles above Earth in a rocket, then his capsule detached and he came back down. From the picture, it doesn’t appear that Fargam enjoyed the trip too much. He looks absolutely terrified. I would have been, too.

This is actually the second monkey Iran has launched in space.  Many people question whether the first monkey launch, which allegedly happened at the beginning of the year, actually happened at all, or if the monkey died in space. 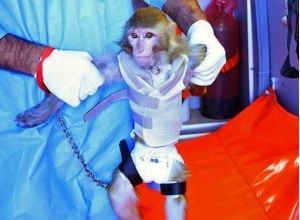 Another pic of cute Fargam.

I’m a little bit of a space nerd, and I’m also the kind of nerd who has a modest stamp collection. My collection focuses on two interest of mine: space and animals.  Where my interests intersect is, of course, animals in space. Space exploration is a, unfortunately, a great example of how we’ve used animals to benefit mankind with little acknowledgment: Many people do not think about or realise just how great the sacrifices were (and are, since we still send animals to space) that animals have made for us. Animals who have been sent to space are forgotten heroes. 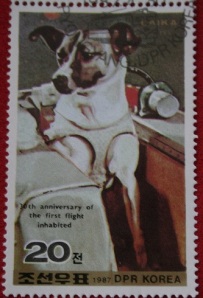 This is a picture of my most favourite stamp in my collection. Even though it’s not in mint condition, I still love it. It depicts Laika, the first dog sent to space in 1957. (Did you know that Laika was a rescue dog? She was found as a stray!) It makes me terribly sad to think of what that poor dog endured on her horrifying trip, which killed her only after a few hours into the launch. She died of overheat and stress, and the worst part is that everyone knew she was going to die. Laika was sent up there on a death mission, for propaganda.

Laika’s trip earned her the title of the first animal to orbit earth.

We have killed many, many animals since we first started sending them into space in 1947. Let us not forgot those that made it back, and those that did not.

Here are some good links relating to animals in space: