On Father’s Day, Meat is King 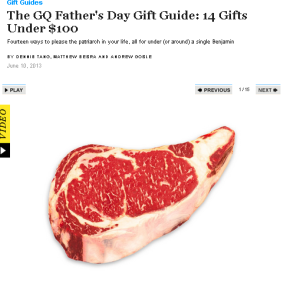 One of my search results.

How we serve our foods, and to whom, reflect our larger culture. That on this day, June 16, 2013, we are supposed to honor the male figures in our lives with animal flesh reinforces patriarchal values of male power. As paleoanthropologist Richard Leakey noted in his book, People of the Lake, written with Roger Lewin, “Women’s social standing is roughly equal to men’s only when society itself is not formalized around roles for distributing meat.”

An Amazon.com local deal I received in my email. This advertisement, coupled with my reading of The Sexual Politics of Meat, spurred this post.

Celebrating Father’s Day – but not Mother’s Day –  by consuming animal flesh is a modern example of how meat has been distributed historically: to the men first, and then to the women – if at all. In The Sexual Politics of Meat, Carol J. Adams describes this link between male dominance and meat eating. After describing numerous examples of the unequal distribution of meat throughout history, Adams points out, “[i]n a patriarchal culture, […] women accede to the dietary demands of their husbands, especially when it comes to meat.”

Celebrating Father’s Day with meat on the grill or from a restaurant also demonstrates the association between masculinity and meat eating: the prevailing attitude is that “real men eat meat.” The consumption of animal flesh is associated with virility. Vegetarianism is therefore emasculation. In a 2012 study published in The Journal of Consumer Research, the researchers found that “men are less likely than women to eat vegetables and instead choose foods that seem to jive more with their macho self-image.” Additionally, “to the strong, traditional, macho, bicep-flexing, all-American male, red meat is a strong, traditional, macho, bicep-flexing, all-American food.” One of the other studies performed by those same researchers showed that university students perceived vegetable-eaters as “significantly more feminine.”

An advertisement on my Facebook newsfeed. (That’s my Dad!)

For most people, eating habits are rarely scrutinized. While it may not seem problematic to celebrate Father’s Day with a steak, a closer look  into this tradition shows that the activity reinforces sexism in meat eating. The three graphics I included in this blog are merely a tiny example of such. This Father’s Day, it is apparent that The Sexual Politics of Meat – first published in 1991 – remains relevant.