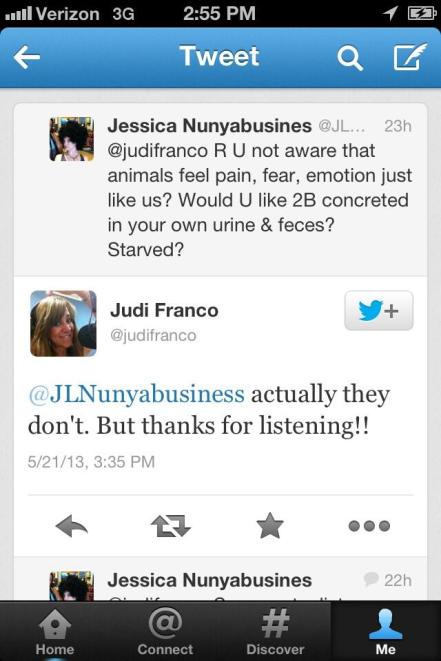 Recently, Judi Franco and two fellow co-hosts (Dennis Malloy and Ray Rossi) of NJ 101.5 allegedly made terrible remarks concerning animal abuse during their radio programs, and the conversation carried over onto social media. The statements were made during discussions of Sammy, a cocker spaniel who was the victim of abuse. The following graphic summarizes what was allegedly said by the hosts: 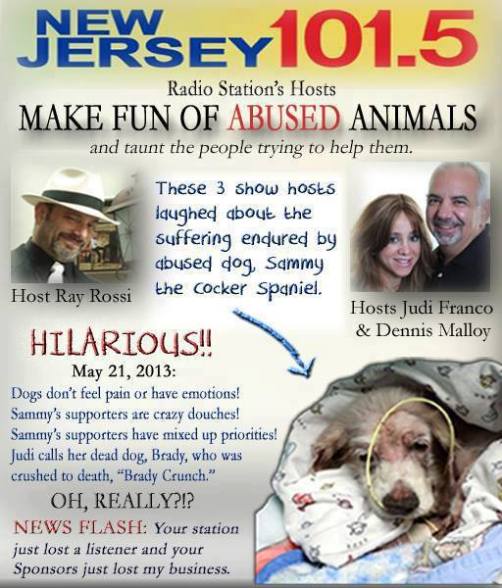 “What a pitiful, what a sorry thing to have said that animals are machines bereft of understanding and feeling… Is it because I speak to you, that you judge that I have feeling, memory, ideas? Well I do not speak to you; you see me going home looking disconsolate, seeking a paper anxiously, opening the desk where I remember having shut it, finding it, reading it joyfully. You judge that I have experienced the feeling of distress and that of pleasure, that I have memory and understanding. Bring the same judgment to bear on this dog which has lots its master, which has sought him on every road with sorrowful cries… which at last finds in his study the master it loves, and which shows him its joy by its cries of delight, by its leaps, by its caresses… You discover in it all the same organs of feeling that are in yourself. Answer me, machinist, has nature arranged all the means of feeling in this animal, so that it may not feel?” – Voltaire, A Response to Descartes

Pain is a mental event that, while cannot be observed by others, can be inferred. Judi, like probably everyone else on the planet, has surely witnessed others experiencing pain: a child’s tears following a skinned knee; a person’s shout after  accidentally hammering not a nail, but their finger; etc. We utilize what we understand about our own physiology and our own experiences of pain to infer the pain of others.  We can do the same for inferring pain in animals.

In addition, we know that these animals have nervous systems very like ours, which respond physiologically like ours do when the animal is in circumstances in which we would feel pain: an initial rise of blood pressure, dilated pupils, perspiration, an increased pulse rate, and, if the stimulus continues, a fall in blood pressure. Although human beings have a more developed cerebral cortex than other animals, this part of the brain is concerned with thinking functions rather than with basic impulses, emotions, and feelings. These impulses, emotions, and feelings are located in the diencephalon, which is well developed in many other species of animals, especially mammals and birds. – Peter Singer, “Do Animals Feel Pain?“

Additionally, Philosopher David DeGrazia has an easy and quick rundown of the argument supporting the notion that animals experience pain, which includes physiological responses in animals:

The capacity for feelings (such as the ability to feel pain) is “sentience.”  Sentience in animals has been well documented. For example, here is a quick clip from National Geographic about elephant mourning, in which emotions are displayed:

Judi’s own dog  died in such a way that apparently warrants humor. In an article about Judi which appeared on nj.com, the dog’s death is described:

If Judi believes that animals don’t experience pain, then she must also believe that Brady, being only a dog, was incapable of processing the physical experience of being crushed to death; that his death was painless and emotionless. Scientists and  philosophers would disagree.

Judi’s tweet regarding animals incapacity  to experience pain has since been deleted.

After days of silence following the radio program, NJ 101.5 finally released a statement on the matter. The station has yet to release a transcript or full audio, and it seems unlikely that the station will do so, claiming there is no transcript. In the meantime, please continue to voice your opinions and responses on the station’s Facebook page.